The gait cycle is the term describing the ambulatory phase of walking or running. It is rather complex with each gait pattern being unique to each individual. In fact so unique it is likened to our fingerprints. There are many reasons that our gait pattern differs amongst us however there are still core components that can be measured and evaluated by podiatrists, clinicians, or scientists.

The gait cycle can be divided into 2 distinct phases. The weight bearing or stance phase, and the non-weight bearing or swing phase. For obvious reasons the stance phase is of importance, particularly given  that the foot has several unique functions to fulfill during the time it is in contact with the ground. It must,

When compared to running the foot has a lot more time to perform these tasks when walking. Given the foot contact time of sprinting is around 0.2 of a second, you can see how critical is the timing of these specific foot movements and the velocity at which these occur. Quite simply they must be synchronised so that movements occur in their appropriate sequence. A small “timing error of foot function” may indeed have significant injury consequences.

There are several defined phases within each step taken that take into account the different functions of the foot. Initial foot contact, mid stance and propulsion are common phases that are reviewed. If you have seen a podiatrist then you will have probably undergone a gait analysis where they check your foot position throughout each phase. There is significant variability of an individuals movement during walking or running and this is why no two gait patterns are the same. We do however consider that normative ranges of motion occur and as you can appreciate this range is like a bandwidth for which we would like most feet and lower limbs to function within. 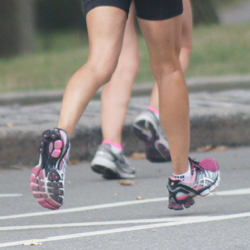 Initial contact normally occurs at the heel with approximately 80% of runners heel striking. There are some that land on the mid to forefoot with the later often as a direct result of calf tightness. At initial contact the foot functions to both absorb shock as well as rapidly ensure a stable position is obtained. Thus the foot moves from heel to toe ( if you are a heel striker) and also from a supinated position to a pronated position (foot rolling inward). In doing so the foot is using joint motion to absorb shock however it is trying to make total contact with the ground such that full plantar contact can be made.
Understand that foot pronation is very much a normal movement pattern. Excessive foot pronation is however undesirable and can contribute to injury by placing additional strain on joints and soft tissues.
Once the foot becomes flat - ie the forefoot comes in contact with the ground the next phase commences. 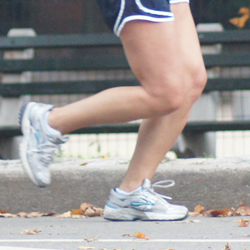 Midstance is the phase of gait where the foot assumes more of a support and overall stability role. The complete sole of the foot is weightbearing as this limb suppors the entire body weight. This is referred to as single legged stance. During this phase the foot has transformed from a shock absorber and is now in stability mode. Maximum  knee flexion occurs at the same time as maximum foot pronation. The foot should not continue to pronate beyond maximum knee flexion. The body weight is moving forward over this fixed limb and as it does so the foot commences a change toward propulsion. Therefore the midstance phase ends as the heel begins to rise off the ground.
The midstance phase is also considered a transition phase given the foot commences pronation at the start of this phase and supination at the end.

Propulsion (or toe off) is the final stage of the stance phase. It begins immediately as the heel lifts off the ground. During propulsion the foot becomes supinated, allowing the structure of the midfoot to brace tightly producing a rigid lever effect. This region must be tight and stable to enable the body weight to propell forwards.

As weight shift transfers forward ansd the big toe flexes upwards the soft tissues in the arch tighten. This acts as a further stabiliser and helps to generate supination. This is called the "Windlass" mechanism and is an important piece of engineering. If this is impaired by continued foot pronation then this can affect the stability of the foot and increase risk of injury.
At this time the ankle is starting to flex downward and the knee extending (straightening) to propel the body forwards.