Footbionics support and attend most New Zealand and Australian state or national podiatry conferences. We are usually one of the busiest trades with growing interest in our range. Our guess the foot lolly competition is becoming somewhat iconic and has been running ever since our first national conference we attended over 6 years ago.

Our biggest lolly jar yet! Congratulations to Tokhy Hoang of Sprightly Feet Podiatry who won our $750 Footbionics Gift Pack (and lolly jar) She posed with the jar at our booth and did well to hold the jar for the pic - it's pretty heavy!

Thanks once again to all who visited our Footbionics booth and entered the competition. We were swamped at times but it was great to see your faces again and catch up with you all. We look forward to the feedback on our new BioMedical 3/4 soft model launched for the first time at the conference. Feedback from you has been incredibly favourable so far. 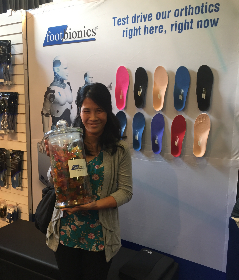 In a first for our competition that has become iconic and run for nearly 10 years - we had a tie. Both Claire O'Shea and Erin Beeler guessed 378 foot lollies being only 2 off the actual total number. Congratulations to our winners (who split the $750 footbionics orthotics prize between them) and to all those who entered. Its great to have to all attend our booth and catch up. 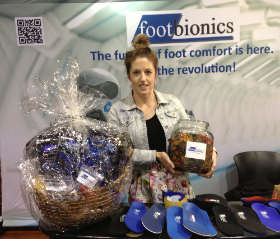 Amber Morrison from Boyce Podiatry won $750 worth of Footbionics product by guessing correctly in our foot lolly competition. She didn't however win the jar as this was auctioned at the conference dinner. Lorraine McRae won the foot lollies (and jar) with a bid of $280.

Congratulations to Zahia Ters of Auburn Podiatry who won $750 worth of Footbionics products by winning the Guess the Foot Lolly competition. She is pictured receiving this "5kg" jar with Andy Nath from DJO Global. 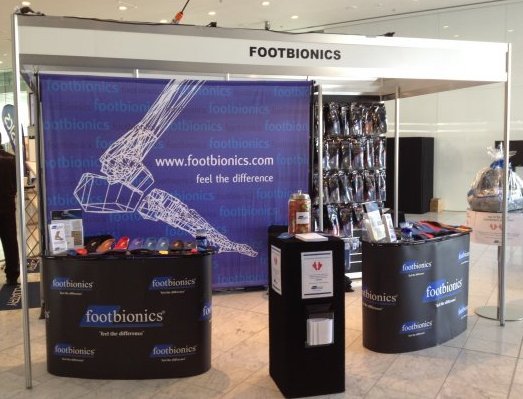 Footbionics attendance at the Podiatry New Zealand conference in Auckland. With around 177 delegates from New Zealand and Australia more than 60% attended our booth and entered our famous guess the foot lolly competition.

Laura Pritchard from Feet First Podiatry in Christchurch won with a guess of 827 foot lollies (only one off the 826 in the jar). We have been running this competition for 6 years now and donate the jar to Podiatry New Zealand to Auction off in helping raise money for podiatric research in New Zealand. 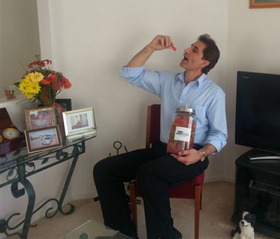 Roger Grech pictured won this years Lolly Jar auction. Well done Roger and finishing these off will take you a while!

Laura Pritchard of Feet First Podiatry in Christchurch guessed within one "foot" lolly the correct number in our 3kg jar! She won a prize pack of $750 worth of Footbionics products.